Stuck in your current situation?

What about showing a great and bold deal of faith in the midst of it?

That’s what singer and songwriter Michael W. Smith encourages us to do in his song “Sky Spills Over”.

The awesome lyrics take us to the valley of dry bones with prophet and man of God, Ezekiel (Ezekiel 37). There we are going to witness the Lord doing something amazing. 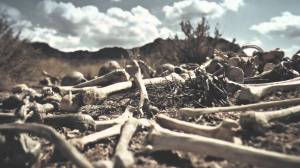 At first, God asks Ezekiel if those dry bones could live again.

Ezekiel pacnics. He has no idea. So, he answered “O Lord God, You know” (implying: I don’t).

Then, the Lord does an incredible thing. He allows Ezekiel to be part of a miracle He’s planned to do: make the bones alive again.

He commanded the man to prophesy life to those bones.

“Sky Spills Over” speaks from the bones’ perspective at this point. It makes you take their place for a while.

Think about for a minute: those dry bones in the valley were abandoned for so long, without hope. Stuck in an infertile place where nobody seemed to care about them and really nobody should.

Then, God tells a man that He still cares for them and that He wants them back. They believed Him when He said they’ll live. So, they put their trust in Him even though all He says seems impossible.

They’re not denying the place they’re right now but are showing faith in spite of it. It’s like the bones are saying: “We know where we are at this moment, but His Spirit is coming. He promised us so. We will live. Just wait. You’ll see”.

“…as I prophesied, there was a noise, and suddenly a rattling;the bones came together: bone to bone… sinews and flesh came upon them, and the skin covered them over… and breath came into them, and they lived, and stood upon their feet, an exceedingly great army” (Ezekiel 37:7-10).

God made an army out of these bones!

Where are you right now? Where did the Lord promise you would be?

Are you trusting Him in midst of your valley?

Maybe you’re just dry bones at this moment… stripped of sinew and skin. But you will live. The wind of His Spirit is coming and will raise you up.

Don’t allow your current circumstances tell you that you’ll be dry forever. Because you won’t.

The wind of His spirit is coming!

Can you hear it?